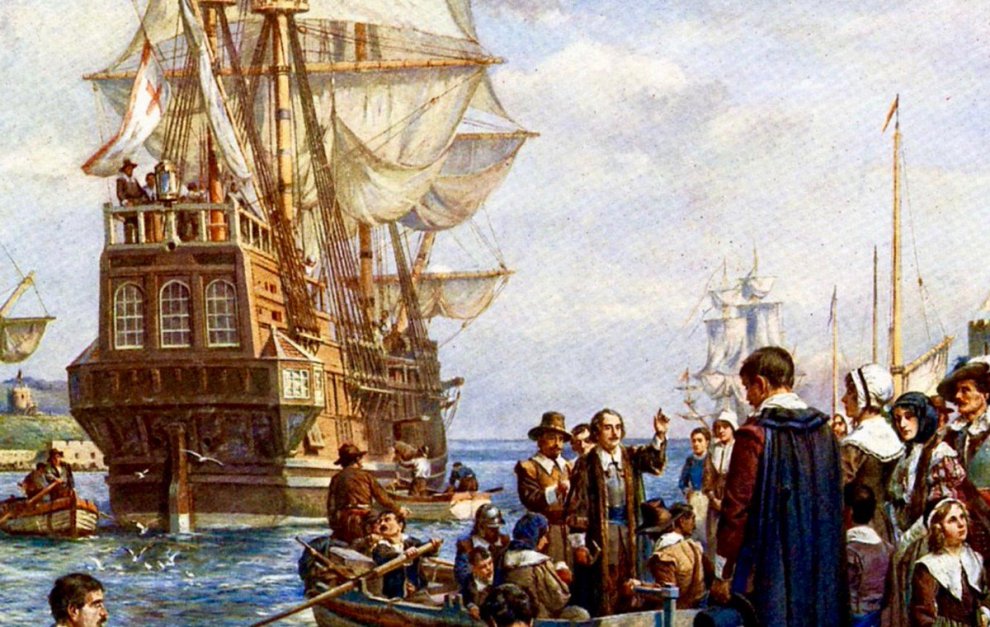 Shout for joy to the Lord, all the earth. Worship the Lord with gladness; come before him with joyful songs. (Psalm 100:1-2)

I have written several articles bemoaning the fact that far too many Americans see Thanksgiving as little more than a day for overindulgence in food and football, but I don’t believe I have ever written about the extent to which America’s Thanksgiving celebration bears wonderful witness to our Christian faith. I wrote this article for the November issue of the Good News and I’d like to share it with you here also. In doing so, I want to acknowledge the outstanding work of David Barton’s Wallbuilders ministry (www.wallbuilders.com), which was my primary resource for the historical information presented here.

Virtually everyone knows that our Thanksgiving tradition began with the Pilgrims in Plymouth, Massachusetts. However, many Americans are unaware that the Pilgrims were also known as “Separatists” because, believing they would never be able to reform the Church of England, they felt compelled to separate from it. Because of persecution in England, they fled to Holland and ultimately set sail for America on the Mayflower. Their intended destination was Virginia, but due to violent storms on the North Atlantic, they landed on the shores of Massachusetts on November 11, 1620.

Before disembarking the Mayflower, which must have come to feel much more like a stinking dungeon than a sailing ship during their two-month, storm-tossed journey, the Pilgrims joined together in reciting Psalm 100 as a prayer of thanksgiving. Then the Pilgrims put pen to paper to create The Mayflower Compact, which is recognized as the first governing document created in the New World. The Mayflower Compact began with these words:

In the name of God, Amen. . . . Having undertaken, for the glory of God, and advancement of the Christian faith, and honor of our King and Country, a voyage to plant the first colony in the northern parts of Virginia, do by these presents solemnly and mutually, in the presence of God, and one of another, covenant and combine our selves together into a civil body politic.

Isn’t that remarkable? The first governing document written for America was set forth “in the name of God . . . in the presence of God . . . for the glory of God, and advancement of the Christian faith.” Somehow I don’t think our children are being taught that truth in many of our schools!

However, even with such high-minded goals for the establishment of the colony in Plymouth, the Pilgrims situation quickly became dire. With no shelter to protect them and very little provision to sustain them, nearly half of those who had set sail from Holland died during that first harsh New England winter. Yet God is in sovereign control of all things, and He gave the Pilgrims the miraculous blessing of Squanto, an English-speaking native Indian, who showed the starving colonists how to survive in the New World by planting, hunting, and fishing. In the fall of 1621, the Pilgrims reaped a bountiful harvest which would sustain them through that winter, so they invited their Indian friends to join them in a celebration thanking the Creator God of the harvest, who had so graciously sustained them.

Edward Winslow, the governor of the Plymouth Colony, called for a festival, inviting the Indians to join the Pilgrims, writing this account:

Our harvest being gotten in, our governor sent four men on fowling, that so we might after . . . a special manner rejoice together after we had gathered the fruit of our labors; they four in one day killed as much foul as, with a little help beside, served the company almost a week . . . And although it be not always so plentiful as it was at this time with us, yet be the goodness of God, we are so far from want that we often wish you partakers of our plenty.

To be sure, the Indians taught the skills for survival and the Pilgrims engaged in a disciplined effort in applying them, but the Pilgrims knew full well that “every good and every perfect gift is from above” (James 1:17) and that it was God who had supplied the bountiful increase.

From Pilgrims to presidents, Christian influence in America remained strong since that first Thanksgiving celebration. President George Washington made Thanksgiving a national event on October 3, 1789 with this proclamation:

Whereas it is the duty of all Nations to acknowledge the providence of Almighty God . . . Now therefore I do recommend and assign Thursday the 26th day of November next to be devoted by the People of these States to the service of that great glorious Being, who is the beneficent Author of all the good that was, that is, or that will be.

On October 3, 1863, as the terrible War Between the States raged on, President Abraham Lincoln proclaimed that Thanksgiving be made an annual event:

I do, therefore, invite my fellow-citizens in every part of the United States, and also those who are at sea and those who are sojourning in foreign lands, to set apart and observe the last Thursday of November next as a Day of Thanksgiving and Praise to our beneficent Father who dwelleth in the heavens.

Regardless of how secular revisionist historians labor to rewrite American history, it is clear that America was founded and built upon the Word of God and the God of the Word. I often find myself in conversation with men and women who do not believe in God, but who insist that they are as thankful as any Christian. They tell me that they are thankful for family and friends, health and wealth, and possessions and possibilities. But when I ask them, “Who do you thank for these blessings?” I get only a sad, blank stare in reply. GK Chesterton put a sharp point on this disturbing dilemma, saying, “The worst moment for an atheist is when he is really thankful and has no one to thank.”

We need the good news of the Gospel to live lives of true thanksgiving. Only the Christian, who has a true, transcendent sense of meaning, can give wholehearted thanks because only the Christian offers thanks to the one, true Creator God from whom all blessings flow . . . just as the Pilgrims gave thanks to Him nearly 400 years ago.