YANK THE PLANK BEFORE YOU CHECK THE SPECK! 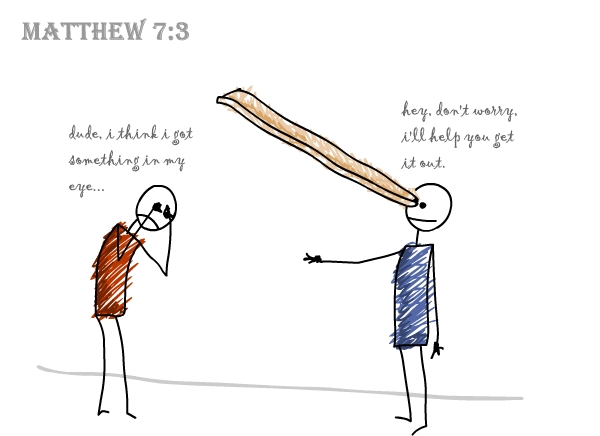 Why do you look at the speck of sawdust in your brother’s eye and pay no attention to the plank in your own eye? (Matthew 7:3)

If you have seen The Visual Bible: Matthew movie, you’ll definitely remember the holy humor Jesus used in this part of His Sermon on the Mount. That humor was amplified in the movie when Bruce Marchiano, the actor who portrayed Jesus, picked up a long staff and held it next to his eye as he looked around at the crowds who were listening to him. The point was obvious; it is absurd to be concerned about the speck in someone else’s eye when you have a six-foot-long plank protruding from your own eye! In fact, as you approach the other person to take the speck out of his eye, your plank will keep bumping into him, causing a great deal of irritation. And so, our Lord tells us, it is best to Yank the plank before you check the speck.

It is interesting to note in the original text that the words “plank” and “speck” come from the same Greek root, which means they are of the same substance. Now, there is some truly inspired irony. Since both are of the same substance, it makes it easy for those with the plank to quickly notice those with the speck, because the faults and shortcomings in our own lives are the easiest to pick out in the lives of others. It is not at all uncommon for us to direct anger toward the speck we see in the eyes of others due to a level of suppressed guilt we have because we are dealing with the same exact sin!

Jesus was instructing His disciples, and you and me also, to first focus on our own sins and shortcomings and deal with them. Self-examination is the way of the disciple of Christ, rather than inspecting the lives of others. That does not mean that we do not come alongside of a brother or sister who is caught in a particular sin with the goal of gently restoring him or her, as Galatians 6:1 instructs. The Bible makes it clear that we are indeed our brother’s keeper. But in order to be truly helpful, we must yank the plank first. Otherwise our own sin will bump so roughly and rudely into the other person that they will find our well-intentioned words of correction to be an irritation at best . . . and gross hypocrisy at the worst.

How would you evaluate yourself today? Are you better at self-examination? Or speck inspection? Sometimes an honest answer to that question will go a long way toward setting us on the right track of dealing with our own plank before we begin dissect the speck in the eyes of others. Remember, what bothers you most in the lives of others is probably the very thing you need to deal with in your own life!

Take your plank to Jesus and lay it at the foot of the cross. The more time you spend in self-examination, the less time you will have to inspect the speck in others. That’s better for you, quite likely better for them, and far more glorifying to God.

One response to “YANK THE PLANK BEFORE YOU CHECK THE SPECK!”