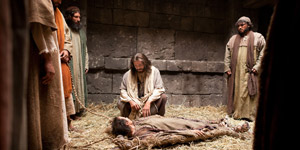 There are some passages of sacred Scripture that, on the surface, may seem confusing . . . even crazy! Today I want to explore one such passage, which I call a “paralyzing proclamation” from our Prince of Peace.

When Jesus again entered Capernaum, the people heard that he had come home. So many gathered that there was no room left, not even outside the door, and he preached the word to them. Some men came, bringing to him a paralytic, carried by four of them. Since they could not get him to Jesus because of the crowd, they made an opening in the roof above Jesus and, after digging through it, lowered the mat the paralyzed man was lying on. When Jesus saw their faith, he said to the paralytic, “Son, your sins are forgiven.” (Mark 2:1-5)

Can you imagine what the paralytic and his four friends must have been thinking? After all the effort they had put forth just to get an audience with Jesus, all He said was, “Son, your sins are forgiven.”

If I was the paralytic, my brain might well have locked up at that moment. “What? Are you kidding me? Really? Perhaps you don’t understand, Lord. I didn’t come here to have my sins forgiven; I came here to have my legs healed so I can walk again! What in the world is going on here?”

Here’s what was going on: Jesus was telling His audience—the people of Capernaum and you and I today—that there is something far more important in this life than physical healing. To be sure, anyone who had lost the use of his legs would desperately want to regain it. Worse still, at that time the Jews believed paralysis was a sign of God’s judgment for some kind of abiding sin. It was a horrible condition. But as Jesus looked down at the hopeful paralytic, lying on his mat, He made it crystal clear that there is a deeper healing that we all desperately need.

First, in saying, “Son, your sins are forgiven” Jesus was unambiguously stating who He is. Only God can forgive sins, and Jesus was telling His audience that He is the one and only Lamb of God who takes away the sins of the world. He was also making it clear that the forgiveness of sins is far more important than the healing of our physical infirmities.

But the story does not end there! When some teachers of the law were grumbling in their hearts that Jesus would presume to offer forgiveness of sins, Jesus perceived their thoughts and said to them . . .

“Which is easier: to say to the paralytic, ‘Your sins are forgiven,’ or to say, ‘Get up, take your mat and walk’? But that you may know that the Son of Man has authority on earth to forgive sins . . .” He said to the paralytic, “I tell you, get up, take your mat and go home.” He got up, took his mat and walked out in full view of them all. This amazed everyone and they praised God, saying, “We have never seen anything like this!” (Mark 2:9-12)

Jesus has both the authority to forgive all our sins and to heal all our infirmities. How sad it would have been for the paralytic to have only had his legs healed, if had walked away still travelling on the road to eternal destruction. But Jesus, in His unrelenting mercy and grace, gave the paralytic both the physical healing that he wanted . . . and what he needed most!