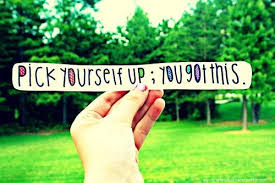 In 1306, while Scotland was at war with England, Robert the Bruce became king of Scotland. Legend says there was a time when Robert took refuge in a cave to hide from the armies of England, and while in the cave he saw a spider trying to attach its web to a ceiling beam. Over and over, the spider tried and failed. Eventually, however, the creature succeeded in its task.

After a number of battles, Robert the Bruce led his men in the Battle of Bannock-burn in 1314. It was there where Scotland won its independence. This story of the spider is captured in the very familiar maxim . . .

“If at first you don’t succeed, try, try again.”

Christian believer, I want you to carefully consider this: your life is to be defined by getting up one more time than you have been knocked down. It’s as simple as that! To be sure, God has called you into His perfect plan for your life, but make no mistake, along the way—perhaps even today—you will get knocked down. For decades, I have told student athletes I was coaching that falling isn’t failing unless you fail to get up! Proverbs 24:16 exhorts us, “Though a righteous man falls seven times, he rises again.”

So, regardless of the personal, professional, or relational difficulties you may be facing today—perhaps, like Robert the Bruce, you find yourself in a proverbial “cave” of conflict or confusion—remember the story of the spider. God has called you to be a spider-saint. Never give up and never give in!

The Bible is chock-full of examples of those who did not succeed at first … or on the second attempt … or even the third time. You do remember Peter denying his Lord in the courtyard, don’t you? Yet our Lord would not let him stay down. God helped Peter back up and set him right back into kingdom work by causing Peter to take his focus off his failure and put it back where it belonged—on Jesus.

Look today to the only One who can bring you both the encouragement and the comfort you need, no matter what “cave” is currently enclosing you. Remember: “If at first … or second … or third … you don’t succeed, try, try again!” God has given you everything you need to be a spider-saint, so keep trying! In the end, you will be glad you did and give God the glory.